Scottish Sheep Farm of the Year 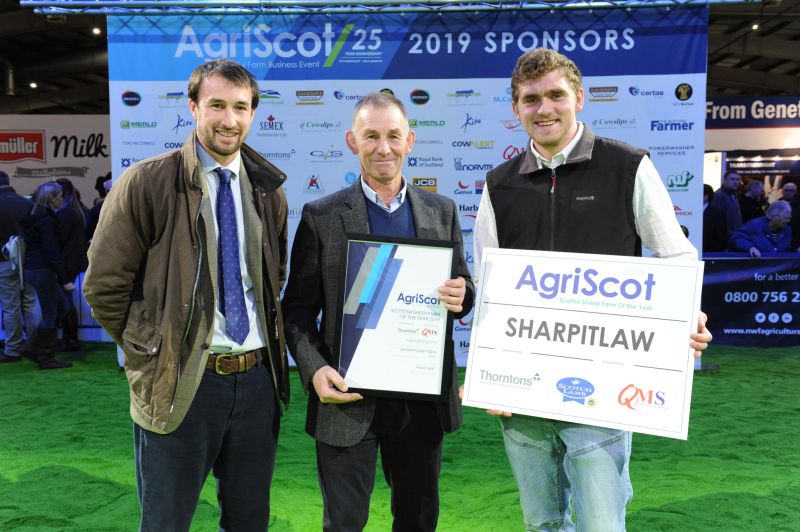 A Kelso farm, which showcases excellence in the production of livestock in Scotland, has been announced as the winner of the AgriScot Scottish Sheep Farm of the Year 2019.

Sharpitlaw Farm beat off stiff competition from other sheep farmers across Scotland, including finalists Swinside Townfoot Farm near Jedburgh run by Peter and Vicki Hedley and Orchardton Farm in Ayrshire run by James Nisbet.

The aim of the award is to showcase excellence in sheep production in Scotland and raise the profile of the dedication and stock management skills behind the production of Scotch Lamb PGI.

Sharpitlaw was recognised by the assessors for its business resilience and the scale of the enterprise, run by Kevin, with minimal help over such a wide geographical area.

In addition, the assessors recognised Kevin’s investment in young people, his ongoing animal health planning and his uptake of new ideas to make it easier to work single-handedly but retain a good work-life balance.

As well as receiving the coveted title, Mr Stewart received a £500 cheque as well as a £250 voucher to celebrate their success at a Scotch Beef Club restaurant. The club, run by QMS, has around 150 members committed to serving top quality Scotch Beef PGI.

The assessors for the award were Hamish Dykes, AgriScot board member, Kate Rowell, Chair of QMS and Neil McGowan, recipient of AgriScot Scottish Sheep Farm of the Year 2018 award who visited each of the three finalist farms.

QMS Chair, Kate Rowell commented: “I was extremely impressed with the businesses of all three finalists, but Kevin’s level of stocksmanship, his grasp of figures relating to all parts of his farming enterprises and his willingness to adapt to a changing market make him a very worthy winner.”

AgriScot Chairman, Robert Neill commented: “The sheep sector has not been without its challenges. We are grateful to all the farms entered for this award. It is great to have people willing to showcase the sector in the current climate.

“Huge congratulations to our finalists, and of course to our Scottish Sheep Farm of the Year, Sharpitlaw. The farmers, families and teams behind these successful enterprises should be rightfully proud.”

Kevin Stewart of Sharpitlaw Farm in Kelso said: “We are delighted to win this award and to be recognised for our production of Scotch Lamb PGI. We were up against two other tremendous businesses who are also producing to the highest of levels.

“We really enjoyed the process, including welcoming the assessors on farm, and the rigorous assessment; it has been hugely worthwhile for both ourselves and the wider business.”

As well as evidence of a high standard of technical and financial performance, those assessing the farms looked for evidence of the uptake of new ideas to improve efficiency and profitability and whether the businesses had an eye on the market for the end product.

The farms were also assessed on the passion and enthusiasm of the farmer and others involved in the business, to efficiently produce high quality animals.

Kenneth Mackay, partner and head of the Land and Rural Business team at Thorntons, said: “These awards champion an industry which has the highest welfare and environmental standards in the world. We’re proud to help support AgriScot and recognise the achievements of those within the agricultural sector. Congratulations to the deserving winner of the Scottish Sheep Farm of the Year title for 2019.”

Scottish Sheep Farm of the Year 2018