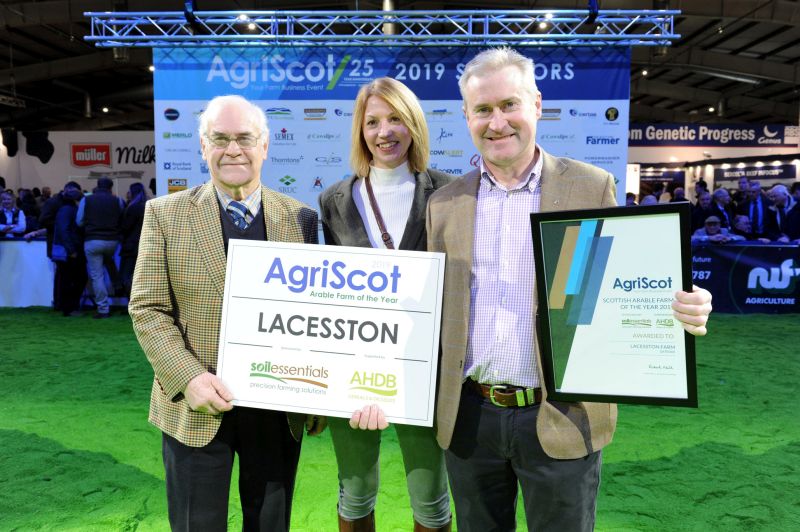 The award, supported by AHDB and sponsored by Soil Essentials, recognises farmers who focus on soil health and make best use of innovation and technology.

A firm grip on the farm’s finances and use of energy-saving technology helped John secure the prestigious award.

Accepting his award at AgriScot Fergus Ewing, Scotland’s Cabinet Secretary for Rural Economy and Connectivity, John said: “I was surprised and honoured to be nominated and did not expect to win. I know the other two finalists well and we are all part of a benchmarking group. I’m sure the result was very close.”

John grows cereals and potatoes and has a cattle-finishing enterprise on the 300ha farm. The 60 ha of pre-pack potatoes is the main focus of the business. His cereal rotation is fairly traditional, with the main area (120 ha) down to spring barley, with the rest used to grow winter wheat, winter barley, oilseed rape and oats.

Regular soil sampling and chemical, lime and fertiliser applications targeted by GPS technology are the norm at Lacesston but the dung from the cattle enterprise is also key to keep the mainly light soil high in organic matter.

Benchmarking has helped John to control costs. He has also made good use of a wind turbine and solar panels to reduce potato storage costs and the farm’s carbon footprint. He said: “Software is in place to over-cool the potatoes when we are generating as a means of storing renewable energy. In calm or dull weather, the temperatures are allowed to rise until cheaper night electric can be used.”

His use of resources and renewables impressed judges Donald Ross of Rhynie, Tain (the 2018 winner) and AHDB Cereals & Oilseeds Board member Andrew Moir, who farms at Thornton Mains, Laurencekirk.

Andrew said: “Lacesston is a family farm that many arable farmers in Scotland can identify with but, I believe, most could learn from John. He has a good grip on finances and uses technology and renewables to good advantage.”

Donald agreed: “John is a very canny farmer; every decision is analysed and he understands and controls his costs. It is not the easiest farm to manage, at 400 feet with a relatively high rainfall, but the soils were in very good heart, despite the difficult autumn we have just had.”

A member of Scottish Agronomy and director of Tayforth Machinery Ring, John is no stranger to winning awards, having taken the prize for the best soil at the 2018 Royal Highland Show.

The other finalists were also from Fife; Balbirnie Home Farms, Freuchie, managed by David Aglen, and, Cornceres at Anstruther farmed by Craig Peddie.